This new section of the website is devoted to answering queries on technical matters plus links to websites of guitar makers, players, publishers, etc.

During a recent class the subject how best to perform the ‘pizz’ passages in bars 21 and 22 of the opening movement (Allegretto) of Moreno Torroba’s Sonatina cropped up. If the conventional pizzicato (or muffling) technique is used there is a danger of accidentally cutting short the values of the upper chords. My own method of execution for this passage is to use a light apoyando stroke with the pad of the right hand thumb immediately rocking the hand back damping the sound with the side of the thumb. To achieve the effect several times in succession, and at the required tempo, means maintained a loose wrist. Whether this effect was suggested by the composer or was Segovia’s idea is not clear but when performed well it’s extremely effective. 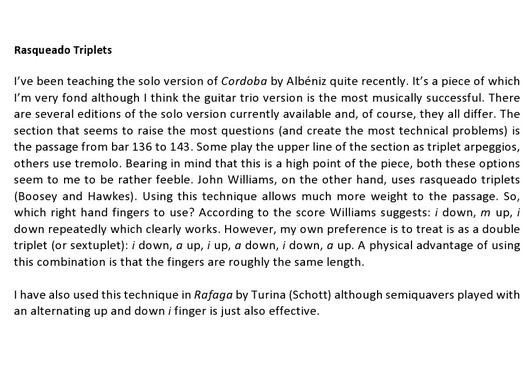 What looks like a single voice melody above a simple bass line is in fact a much more complex multi-layered composition. With a new piece you might consider working out phrasing before planning fingerings, however there are few pieces where the fingerings dictate the phrasing and voicing more than this one. Take the first bar, for example, with no fingering suggestions there several possibilities: the majority of the upper notes could be played on the 1st string, slurs could also be used as in Segovia’s edition (Schott). Notice in Example 1, shown here, that I have suggested a form of beaming revealing two voices - foreground and background.

Later in the piece (bars 30 - 32) there is another ‘hidden’ melody, this time it’s created by the lower of the two voices, shown here in Example 2. Of course I’m not able to say this is what Bach intended but the implied harmonies certainly suggest it. 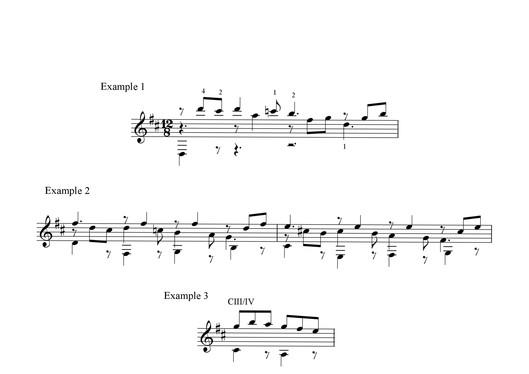 A problem I’ve encountered at courses, summer schools and even during masterclasses concerns apoyando (rest stroke) scale playing, particularly when the scale is descending. A right hand finger will come to rest against a string and then the same finger is employed for the next stroke. In other words, finger alternation is interrupted. Often the player will not be aware of the situation until it’s pointed out. A very effective exercise that will help to cure this problem is shown below.

Try playing Example 1 repeatedly with alternating i and m fingers. As you’ll see, the exercise consists of groups of three notes played with two right hand fingers therefore each time the pattern is repeated the starting note will be played by a different finger: i the first time, m the second. Avoid the temptation to get back to the same starting finger for each group. Now try Example 2. This may prove to be a little trickier; the reason being that the notes now cross two strings, exactly as they will when playing a scale. Once this has been mastered try the same exercises with other finger combinations. I’ve found this to be very successful. 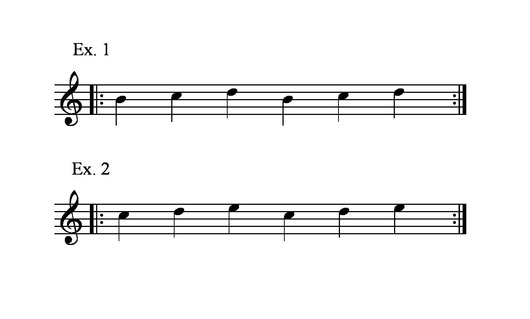 Pizzicato stridente is a term that appears at the beginning (and elsewhere) of Emilio Pujol’s Guajira from the Trios Morceaux Espanols (Eschig) - a piece I recorded several years ago. A similar effect is used in Gilbert Biberian’s Prelude no.6 ‘Pierrot’ from the set of 24 Preludes, Book 1, (Editions Orphée 43215); another piece I’ve recorded.

Standard pizzicato (or étoufée, meaning, in French, ‘stifled’) is where the strings are damped, or muffled, by the fleshy part of the right hand below the little finger. Many pieces in the guitar repertory use this effect, Leo Brouwer’s popular Cancion de Cuna (Eschig) and Campo, the opening movement from Ponce’s Sonatina Meridional (Schott) being two examples. To achieve the pizzicato stridente effect, the action is similar but the right hand is moved a little closer to the soundhole allowing the plucked string to vibrate, or rattle, against the hand. Initially it may be difficult to judge the correct hand position but with a little trial and error it will become consistent. Unfortunately some players, both in recordings and in the concert hall, choose to ignore the direction and instead employ standard pizzicato, some play the notes staccato.

The performance of cross-string ornaments is a huge subject and one that crops up quite frequently. These can be executed in a number of ways. If the two notes E (1st string) and D (2nd string) are employed repeatedly (as in a trill), they are grouped in fours - but without accents. The combination of right hand fingers is very much a matter of personal taste - I favour a, i, m, p. Experiment with different patterns to see which feels most natural. When practising your chosen sequence, it’s important to begin playing slowly before building up to a suitable speed. The pattern I use can also be played as an open string arpeggio initially: a (on the first string), i (on the third string), m (on the second string) and p (on the 4th string) before transferring it to the required notes.

Mordents can also be executed in a slightly different way. If the notes D (2nd string), E (1st string), D are required, some players use fingers i and a, dragging the a finger back across the final D.

Over-simplifying perhaps, but with each ornament the aim should be to reach the final note as quickly, clearly and as evenly as possible, leaving the final note to sustain. As ornaments are governed by factors such as period, personal opinion, note values and tempo, it is impossible to even begin covering the many examples here.

Personally, I avoid cross-string ornaments in renaissance lute music and Bach’s lute, violin or ‘cello works, using them only when a linear ornament is not possible. For arrangements of keyboard music: Scarlatti, Cimarosa, etc., they are ideal. Wherever they appear, care must be taken to avoid them sounding unsubtle. However, one advantage of the cross-string ornament is that it is much easier to control dynamic variation during their execution.

This is another subject that crops up regularly, particularly with regard to the works of Villa-Lobos. Unfortunately there is still no standard way of notating harmonics. Some composers (particularly non guitarists) tend to place a zero above or below the note-head. Others use a lozenge shaped note-head; others place ’12 har.’ - ‘7 har’, etc. above the notes required.

The cadential fourths and chords in harmonics in Schottish-Chôro from Suite Populaire Brésilienne (Eschig) can be tricky to fathom. Those appearing in bar 16 are simple to perform when understood. Imagine the indicated notes were to be played as natural notes rather than harmonics. I use a third finger half barré for the F sharp and B, and first finger for the following E and A. For the chords in bar 15 of the central A Major section, use a similar procedure; imagine playing natural notes initially: the first chord (from the top) consisting of G natural - 5th fret on string 4, E - 7th fret on string 5, and G sharp - 4th fret on string 6. The second chord comprises A - 7th fret on string 4, C sharp - 4th fret on string 5, and A - 5th fret on string 6. The same chords also appear in the composer’s Gavotta-Chôro (Eschig). Unfortunately it can be quite difficult to achieve clarity and uniformity of sound for each chord but moving the right hand a little closer to the bridge can help.

All the harmonics mentioned above are ‘natural’ - those found at certain points along an open string - 12th fret, 7th and 5th being the easiest to achieve. Harmonics at the 4th and 3rd frets are also possible, particularly on the lower tuned strings. Curiously 4th fret harmonics on each string can be duplicated at the 9th fret. Also, any harmonics found at points along the fingerboard can be recreated the other side of the 12th fret, over and beyond the soundhole. These, of course, are more difficult to locate as there are no frets to use for reference.

Natural harmonics will provide many note pitches but unfortunately not all - the note F being one example. Artificial harmonics require a different right hand technique. Begin by playing the 12th fret harmonic E on the 1st string but with the right hand alone. This is done by touching the harmonic point with the tip of the i finger (exactly over the fret) and plucking the string with the a finger. To produce the note F, a semitone higher, stop the note with a left hand finger as usual and touch the harmonic point with the tip of the i finger at the 13th fret. You can continue chromatically along the string using a similar procedure or, of course, move onto a different string. This effect is used in many pieces in the repertoire: Miguel Llobet’s arrangement of the Catalan folk song El Testament d’Amelia and the second of Walton’s Five Bagatelles, being two examples.

I’ve been gratified by the response to my arrangement of Lutoslawski’s ‘Twelve Folk Melodies’. I understand several prominent players are in the process of learning the set, some with a view to recording all or a selection of the pieces. I too am considering adding the work to a forthcoming solo CD. Since the arrangement was published in 2009 by PWM in Poland (Lutoslawski’s own publishing house) I have made one slight revision; this concerns the section involving harmonics in piece number 7, ‘Master Michael’, bars 21 - 24. As written, the harmonics are difficult to produce consistently. I have made the decision to locate them as shown in the following extract. The first of the two harmonics is natural, i.e. played at the 19th fret of the open 1st string. The second harmonic is played artificially - the required note A being under the already positioned 5th fret barré. In the extract the harmonics are shown at their sounding pitch.