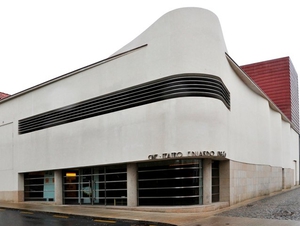 
Cine-teatro Eduardo Brazão is a Portuguese theatre located in Valadares. It was built in the decade of 20 by Alexandre Martha da Cruz, and after years of decline it was rebuilt in 2007. The original building was inspired in Odeon, a theatre in Porto, but the restored one is a project of the Portuguese architect Joaquim Massena