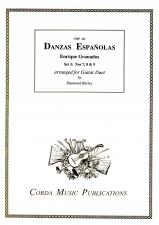 The third set from the famous 12 Spanish Dances by Enrique Granados, expertly arranged by Raymond Burley.