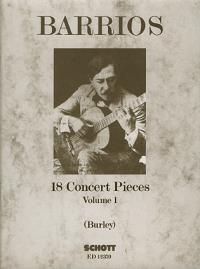 Few original manuscripts of Barrios' compositions have survived, but fortunately, he did make over thirty 78rpm grammophone records, as far as is known between 1910 and 1928, the majority of which were issued on the Odeon label.

This collection of eighteen concert works by Augustin Barrios Mangore has been compiled as a result of listening to the composer's own recordings (Chantrelle Historical Recordings, CHR 001/3) together with my direct practical experience of performing the music in concert; both activities have made me increasingly dissatisfied with many of the editions currently available.

It should be understood that such a spontaneous and imaginative composer/performer as Barrios would frequently revise his music, to a greater or lesser extent, from one performance to the next.

With this in mind, I am offering here, not the 'definitive' Barrios (for such a thing may never exist), but what I consider to be accurate and practical versions of eighteen of the best works from this composer.