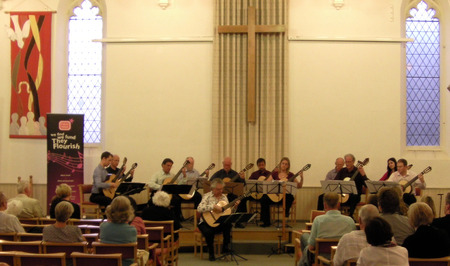 On 2nd July a concert involving 12 guitarists was staged at the lovely Methodist Church in Witney, the proceeds going to the Duchess of Kent's charity 'Future Talent'. As with the majority of these events rehearsal took place on the day of the performance and I'm pleased (perhaps relieved) to say that it all came together brilliantly. I'd like thank the players for giving their time and talents: Steve Christmas, Arne Brattland, Debbie Haeck, Gary Jordan, Andrew Stanton, Roger Green, Orshi Pataki, Mike Hinchliff, Richard Butters, David Pedder and Shaun Kennedy. If you've just counted them, I was the twelfth player.

Another multi-guitar event for 'Future Talent' will be held at the same venue on Saturday 28th April next year.