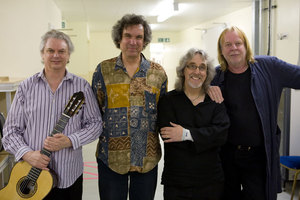 Concerts come and go and are not always remembered for the right reasons: examples being: an audience member fainting in Phoenix, Arizona, a broken guitar string, or even a noisy drunk making a nuisance of himself in the middle of the Bach 'Prelude, Fugue and Allegro' in Frankfurt! Happily our concert in the recently refurbished Birmingham Town Hall will be remembered for all the right reasons.

As we're all very busy with our own projects the majority of preparation took place via the telephone and email. Gordon and I planned the format of the evening a month or so ago.

After the concert several people asked how much rehearsal time we'd had together – I had to admit that this all took place on the day! Gordon and I have been working closely together for the last six years so our duo items ('A Christmas Carol' and 'Tears of Joy') were already pretty well played in. John Etheridge and I ran through our duo piece 'Places Between' a couple of times. We'd played this together several times during a 'Three Parts Guitar' tour at the end of last year so it was just refreshing the memory. My main concern was the two group pieces that closed the evening, Gordon's 'Maddie Goes West' and 'Fast Approaching'. We'd considered busking these two items but instead I decided to put together two basic arrangements. I ran through these with Rick on a piano in the green room during the interval and held my breath from then on - seat of the pants stuff indeed! I needn't have worried; it all came together brilliantly. The audience reception couldn't have been better. I can't think of a better way to spend an evening: playing great music with such good friends in a terrific venue in front of a capacity audience. Heaven!

I'd like to thank Gordon, Rick and John, my lovely wife (and driver!) Siân, our agent Ashley Yeats for supporting the event, Cath and Geoff Olner for doing such a great job with the merchandise, and last - but certainly not least - Sue and Mike Holton for their continued support and great photographs.

You can see some of Sue's photos from the night in the Gallery here.

Surely this must be the concert to end all concerts I thought as I read the news about 'Three Parts Guitar'. You see, as someone who's loved classical guitar since teenage years, enjoyed Gordon Giltrap's music since the mid 70s and whose listening of choice these days is blues and jazz, for me this seemed to have it all. It didn't disappoint.

First up was the ever-affable Mr Giltrap whose genuine man-next-door approach has endeared him to many, even before they've heard a note. But with the first few notes you remember that this isn't your mate in the pub – this is one of the greatest masters of the guitar and the composer of many a rattling good tune. Four Giltrap pieces old and new opened the event, including one currently untitled and commissioned to celebrate Sir Cliff Richard's impending birthday. It seemed to me that the obvious title was 'Congratulations', but apparently the honour of naming it goes to the winner of a competition organised by the Birmingham Cliff Richard Fanclub. When Gordon reached for the electric guitar, knowing looks and smiles were exchanged in the audience. We were right; the evolution of 'The Dodo's Dream' continues, making the piece even more beautiful. Those around me who haven't seen 'Dodo' performed live before were amazed at Gordon's skill, mastery of the instrument and sheer musicianship.

Raymond Burley had the unenviable task of following 'The Dodo', but did the job superbly. He introduced us to pieces by various composers from different countries and no-one would disagree with Gordon's assessment of Ray as "probably the finest classical guitarist in the country". Obviously, not someone as at ease with words as Gordon, Ray let the music speak for itself. His assessment of J S Bach as "The Guv'nor" endeared him to me and his interpretations of one of "The Guv'nor's" works and of other pieces was sublime.

Until this concert John Etheridge was to me a known name, but someone whose music I'd never heard. After Saturday, that's going to change! The range of styles and techniques was huge, with John demonstrating how much at one he is with the guitar. This was music demonstrating warmth, fun, melancholy, power and vibrancy. A spell-binding set which left my emotions a-jangle.

After the interval Gordon was back for the briefest of warm introductions to Rick Wakeman. Music gave way to comedy for a few minutes as Rick found a microphone that fought back and entertained us with a couple of anecdotes from a life of touring. But this was a man who was in the right company. The music and playing was as spell-binding as that which we'd experienced in the first half of the concert, and all interspersed with Mr Wakeman's wry observations. What a character!

The anticipated climax came as all three guitarists returned to the stage for various combinations of duets and trios. Everything was there from their solo sessions, but this time with the added interaction with other players. These were clearly people who respect and trust each other's musicianship and simply enjoy playing with fellow craftsmen. Wonderful renditions of pieces such as 'A Christmas Carol' and 'A Dublin Day' were rounded off by the reappearance of Rick Wakeman for 'Maddy Goes West'. For me this was one of the high spots of the evening as each musician featured in turn. Unsurprisingly, no-one was selfish and the whole really was greater than the sum of the parts.

So how can you sum up a concert as unique and special as this? I'll leave that to a teenage friend of mine who's no slouch at the guitar and keyboard himself. His assessment? "Awesome!" And that says it all.


It was always going to be a special concert. It did not disappoint.

If you had any pretensions to liking guitar music in almost any of its forms then you had no excuse but to be enthralled. Ray's precision, John's passion and Gordon's consummate mastery, were there to delight and envelope you. And then Rick, living legend, coaxing liquid gold from the Steinway, let you slip and slide to euphoria. 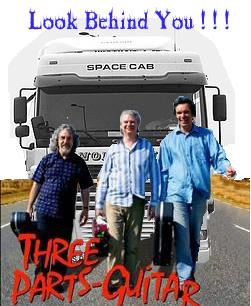 Each musician, at the peak of their art, showcasing solo, treating us to some of their, and our, favourites. Gordon, was as engaging as ever. The Fylde, much to our personal delight, kicked off the set with the fullness only the 12 string can give. Leading us through some old favourites, and a work in progress, to a version of Dodo's Dream that seemed that little more ethereal than usual, as the notes soared and faded. Ray taking us musically to the heat of Spain and Brazil, rubbing the imaginary sweat from his brow, carefully coaxing those magic tunes from a guitar too precious to ever put down. With John we were transported straight to Africa, and not a foot could resist that rhythm, and from there to a Blues club, wreathed in coils of smoke. He showed us a new depth to the electric guitar as his tongue hovered at the corner of his mouth in concentration. And Rick, left elbow working overtime, fingers moving faster than one could follow, caused the notes to flow into each other and around us, transporting us to Liverpool and Hampton Court.

Finally, after every combination of guitar duo had surprised and delighted, the 4 played together. "Muddy" goes West, and Fast Approaching were excellent choices. Despite the size of the venue, the 4 musicians managed to make it feel an intimate concert. There was an openness. At times, the cost to the musicians, in terms of nervous energy, could be guessed at. But professionals to a man, their connection with their instruments was magical. Their camaraderie obvious, no more so than when Rick demonstrated the position required for a 'Giltrap waxing'!

And glancing momentarily at our neighbours now and again, revealed an audience in rapt attention, thrilling to every note and anecdote. The only sadness, that it was over too soon, and then, as we stumbled out into the cool evening, the shock of how long it had actually been - time flies when you are having fun!


A wonderful arena in which to see 4 consummate musicians (and friends) demonstrate their art. The acoustics were marvellous and shows how well the renovation of the Town Hall has been undertaken. Even with the ensemble pieces at the end where 4 different sounds were competing on stage, I could hear each of the four parts clearly.

The programme for the evening rightly kept to a simple plan of 4 solo sections, the audience attention held tightly in each by the pieces selected, leading to a rotation of guitar duets where the individual playing styles and instrument tones blended wonderfully well, and finally a piano and guitar ensemble to round off the evening. "Maddy" was indeed a revelation in its extended form, allowing Gordon to hold it all together with the theme and then giving time to each of Ray, John and Rick to highlight while the others strummed along. A real example of how Gordon's "simple tunes" as he calls them can be adapted to the occasion.

Yes it was over all too soon from the audience's perception (if not the performers' who would be well justified in wanting a breather) but doesn't this just underline what a hugely enjoyable and enthralling performance it was? Well done Gordon, Ray, John and Rick. I wouldn't have missed this for the world.

The next tour for Three Parts Guitar will begin at the end of September 2009. Dates and venues will be announced shortly.