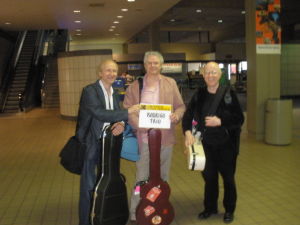 The Rodrigo Guitar Trio has just returned from a very enjoyable and successful United States tour. The group's usual third member Cornelius Bruinsma was unable to be with us this time so the Dublin-based guitarist John Feeley stood in. John fitted into the group very easily and quickly made a positive contribution.

The trio's concert programme consisting of Grieg: Three pieces, Phillip Houghton: Suite, Granados: Three Spanish dances, Bernstein: Suite from 'West Side Story' and Albeniz: Three pieces - was very well received (particularly the Bernstein) and featured about as much contrast as the trio could muster. Audiences were large and appreciative and the post-concert receptions were lavish.

Our hosts treated us to some wonderful, generous hospitality and for that we're very grateful. As always we ate and drank far too much and sampled many brands of whiskey! The temperature in Georgia was very warm and John improvised a sun hat courtesy of the score of one of Grieg's Norwegian Dances.

As always not everything ran quite to plan: an unscheduled stopover in Atlanta caused by a delayed previous flight, and a slight change of programme for the Evansville concert. The players caught the flight to Evansville (just!) but unfortunately the luggage didn't make it. One trio member - who shall remain nameless - packed the music in his suitcase so it meant him playing some items from memory, having some music emailed from England to the hotel, and each of us adding some solo items. Even more contrast! Unfortunately John Feeley's lovely Woodfield guitar was badly damaged en route from Atlanta to Evansville despite using a very sturdy flight case. Scotch tape came to the rescue. We were unable to blame Delta Airlines for John's broken thumbnail - repaired very successfully in a nail bar in Virginia.

Next year's US tour will be undertaken by the English Guitar Duo.

To see some photos from the tour, please click here